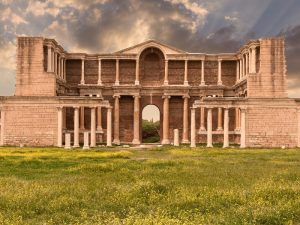 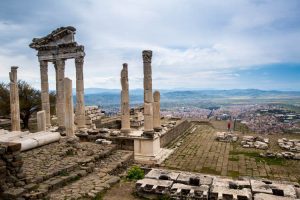 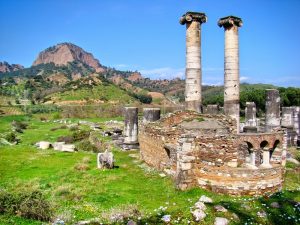 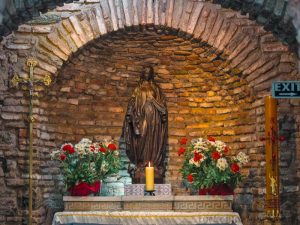 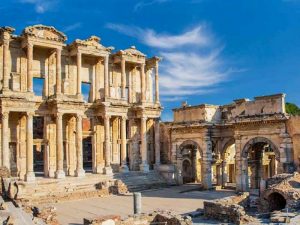 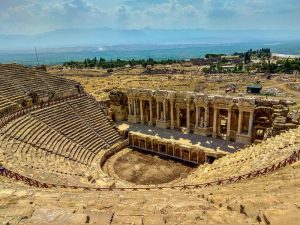 Welcome to the Izmir Airport. Our tour guide meet you at the Izmir Airport and then you depart for Smyrna. The church at Smyrna suffered amid prosperity for its refusal to devotions the Roman Empire. It was the home of the great second century Bishop Polycarp who was burned alive at the age of 86.

After Smyrna, we drive to Pergamon, a most memorable experience will be Pergamum with its Acrapolis and Great Theatre, Altar of Zeus and Red Basilica.(Once pagan temple then converted Christian church) Then, we visit Asclepion the famous medical center of Antiquity.

In the end of the tour, we go back to Izmir and stay overnight.

After breakfast, we visit of Thyatira which was once a busy trading center. One of the Seven Churches mentioned in Revelations.

Then, you visit to Sardis, coins were minted here. You will be impressed by the massive measure of the Temple of Artemis, Marble Royal Road, Gymnasium and Synagogue.

Philadelphia is the last visit of the day. Christ told those who over came that he would write upon them “The name of my god and the name of the city of my god, which is New Jarusalem.” You also see an ancient Wall and Byzantine Basilica.

In the end of the tour, you go back to the hotel and stay overnight in Pamukkale.

After breakfast, we go to Pamukkale. Pamukkale is in Aegean Turkey and it is also called the “Cotton Castle”, because of the white cotton appearance of the mineral bath spas that abound the province, which is rich in calcium. Known as a “spa town” since the Roman era, tourists travel to Pamukkale to relax in warm, soothing and therapeutic waters in the myriad spas. Hierapolis or “Holy City” evangelized by Paul and Epaphras. Also the Apostle Philip lived and burried here. What makes Hierapolis different from most places on Earth is that it is not built on land, neither on water, but on limestone deposits above the mineral springs in the area. It is a UNESCO World Heritage Site because of the ruins that are littered all over the city, including the necropolis that houses the sarcophagi of important ancient figures like Marcus Aurelius.

In the end of the tour back, you go back to Kusadasi and stay overnight.

In the morning, you will be picked up from your hotel and drive to Ephesus Ancient City. Ephesus was the second largest city in the Roman Empire over 250.000 people in the 1st BC. Ranking only behind Rome it was the second largest city in the world. Ephesus was also a harbour city. And, this giant city was built only with marbel. Did you know Ephesus had a largest amphitheater in the ancient world over 25.000 seats? Also see Goddess Nike, Local pharmacy, Hadrian Gate, Library of Celcius (the third largest library), Marbel Street and Harbour Street.

Basilica of St. John, as early as 4th or 5th century a Christian church was built over a simple grave, supposedly the grave of St. John. In the 6th century Emperor Justinian had an impressived omed basilica built to replace the earlier church.

In the end of the tour, you will be transferred back to the Izmir Airport.